No thank you, I’ll hook myself up 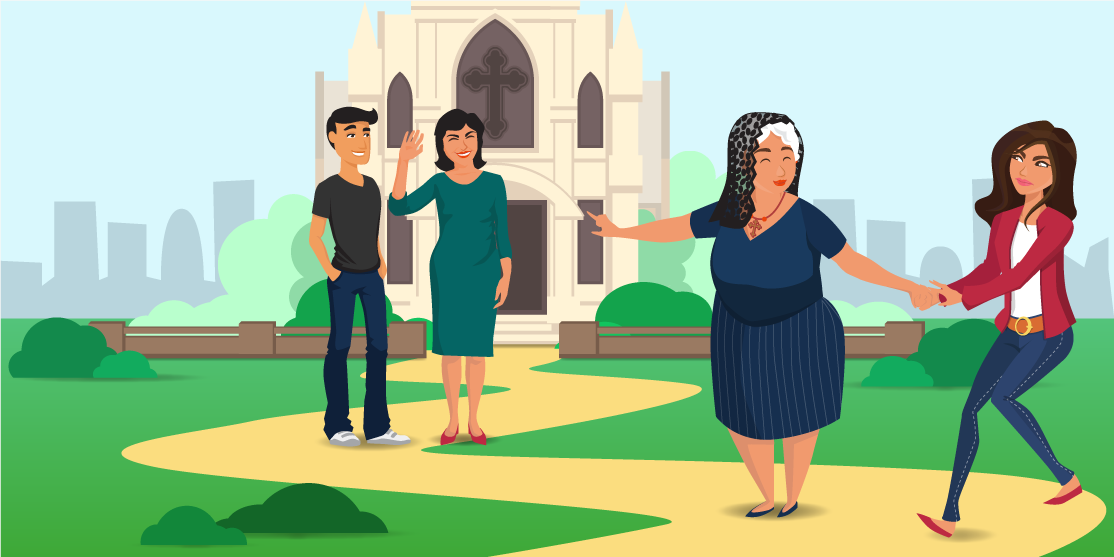 We all have our daily routines. I wake up, eat, go to work, maybe hang out with friends and family afterwards, go home, eat some more because I do what I want, and cap it off with some Netflix. Rinse, repeat.

Somewhere in the day, you might find a moment to log into Facebook and scope the latest wedding, graduation, or political debacle. Every so often, you encounter an all too familiar red notification — a friend request from an unknown member of the opposite sex in the community. “Ehh, he’s kinda cute. Why not?” You accept the request, only to immediately receive a barrage of messages from this guy that solely thinks of you as a dating prospect. It’s not an interesting conversation, but you browse his profile anyway and quickly realize he doesn’t pique your interest. Now, you face a dilemma – how to gracefully get out of this situation without being accused of being a “bitch.” Rinse, repeat.

Sometimes your routine includes a visit home on the weekend and some well-meaning badgering from your mother and nana. “Why don’t you have a good Suraya boy?” You grind your teeth a bit, but hold your tongue for now. You know what they’ve got up their sleeves. You brace and, sure enough, it comes seconds later – old school matchmaking. They’re trying to convince you to meet a supposedly handsome, bespoke, and intelligent Suraya from a good family. Maybe a distant relative of nana’s? It is the same village after all. Nonetheless, you begrudgingly agree to an introduction after church. After the brief intro, the pressure from everyone is sky-high and you agree to a first date.

The date rolls around and you aren’t particularly nervous, more of a morbid curiosity grips you. You sit across from him at the candle-lit table and it doesn’t take long before you begin to ask yourself that all too familiar question: “What have I done?” Aside from being Suraye, you don’t have anything in common and it’s evident that your ambitions are, well, galaxies apart.  As you prod a bit more, it turns out he thinks your place is at home, that you should just raise kids, and that your free time should consist of making your guests chai.  He seems more focused on whether hale should be used when you make chai as opposed to hearing about your dreams and goals. He doesn’t bother to even pay them lip service.

None of this surprises you, but you are disappointed that your own family set you up with a guy that hides behind his protective “back-home” mentality. Your mind ponders the route of dating khware and you think perhaps that avenue might yield more promising results. But, you hesitate to follow through on the idea. You know khware may not ever truly understand the intricate mosaic of your very colorful Suraye being – your ancient language, the big (and loud) family, the way your shoulders bounce during khigga, and the quasi-illegal dolma making process, the same process that led to the police bringing nana home after she trespassed onto your neighbor’s lawn to harvest grape leaves again. Rinse, repeat.

These encounters are common amongst your sisters, cousins, and friends. So, how does one meet a good Suraya or Sureta – one that meets standards that are set a tad higher? Unfortunately, there is a blatant void in our community. It’s tough to connect intelligent, cultured, and beautiful Suraye that would like to date someone of equal calibre while maintaining our traditions and culture. And many of my friends continuously lament that they can’t “find someone” at Assyrian/Chaldean/Syriac functions, whether they be weddings, conventions, or church events (and, frankly, they look a little dead inside when recounting stories similar to the above).

I know I’ve been asked if I knew of a dating website or app for Suraye. Outside of the typical horror stories mentioned above, I never really knew of a dating alternative in the community. Not until recently that is, when my dear friends recognized that modern times call for modern measures to dating in our community. There was a space to be occupied by a dating app and they created SurayeSwipe.

In our community, being career-driven, 30, and single already triggers unnecessary, unwanted social commentary and pressure. Would people gossip more because I had to use another method to find a match? I can see it now, “Did you see Rema’s on that app? Why is she using a dating app? Is something wrong with her?” In reality, that the immediate thought upon being introduced to the idea of a Suraye dating app was that this would be eyba or eyb (shameful) bothered me.

Despite living in an overarching liberal society, we cling to cultural norms that aren’t just antiquated, but that constrain women in our community from growing and advancing. As an independent and liberal-ish young woman, I sometimes find myself ostracized from many social circles, making even meeting a good Assyrian/Chaldean/Syriac guy all the more challenging. Dare to exert your opinions and ideas and you are seen as aggressive or a “bitch.” If you are demure, then you are generally liked. But at what cost? The cost is downplaying your “strong” opinions and “fierce” personality, misrepresenting yourself and, ultimately, losing your sense of self – all to conform. I know because I’ve done it.

I’ve also noticed the standards for which men are measured in our community. And, in my humble opinion, this benchmark does not also apply to women. On the one hand, some mothers express excitement over their sons actively dating around so they can one day be ready to marry and provide a steady supply of grandkids. On the other, those same mothers lament that their daughters have already had too many boyfriends. To avoid that, we’ve all picked up the “talking” phenomenon, whereby nothing is official and we can hide a budding relationship from everyone, including our own parents. It makes perfect sense — how else to avoid having had “too many” boyfriends or having gossip spread? The guys, of course, play along. But, it is hypocritical to me that a covert operation approach to dating is deemed more acceptable than a transparent dating app that allows you to filter for specific traits in a partner, e.g. location, education, religious affiliation, and religiosity.

As for me, I’m over it. Talking about this publicly or even joining a dating app takes me way out of my comfort zone, but, hopefully, both talking about my journey and joining SurayeSwipe present new opportunities that I wouldn’t have had otherwise. I wouldn’t be doing either unless I strongly felt that a cultural shift was necessary amongst our people. I’ve never had the courage to initiate a conversation with a Suraya, let alone in a public sphere such as a Suraye wedding or convention. It’s seen by some as too aggressive. Still others, unfortunately, see it as “slutty” (an adjective which I would never assign a fellow woman). What we fail to realize is that by shaming another woman in this way, you have only shamed yourself and your community.

It’s time for our young women to stop hiding in the shadows of these double standards. I understand it can be a difficult choice to break the mold. But, I encourage you to put aside your hesitations, to ignore the stigmas, and to download the only app that is connecting ambitious and successful Suraye that want their culture to survive. This is a great concept – it uses an effective mode of dating (evidenced by the multi-billion dollar industry as a whole) and tries to make sure that our ancient culture and bloodlines survive. There is nothing shameful about that! At the end of the day, it’s all about love (and getting mom and nana off your back). Rinse.

Rema Elizabeth Shamon, aka Reems, was born and raised in Chicago. When she’s not working and being an ‘alasas’ finance boss lady during the day, you may find her reading, traveling, playing (really bad) tennis, scoping out the latest burger joint, getting her khigga on, writing poetry and working on being tri-lingual.

Click here to assign a widget to this area.

Click here to assign a widget to this area.